Phil Elverum, When Can Do, Swiss Army Man Reviewed, Part 1

I have some very talented friends. Tuesday evening Michelle invited me over for beer. So I clocked out of work and plopped my ass down in her backyard. Our conversation meandered to her musical improve troupe, When Can Do, in which she acts, sings and plays the cello. She showed me a few of their practice recordings, and their similarity to Phil Elverum's style is impressive. So I showed her a couple Microphones tunes.


Elverum consistently lands the inexpressible with unironic lyricism and a mammoth variety of rich earthly freshness. He avoids cliches through attention to specifics. He frequently draws mundane relatable details into emotionally brindled songs.

The Glow, Part 2 begins with an anthem of coarse tonal punches that eventually yield to guitar strums cleverly bandied between speakers, and this verse:

He bares himself out in the open, but no one notices, to his embarrassment. So he retreats. What artist can't relate to that?

Treating most frequently with terrestrial imagery, Elverum is a master iconographer of wilderness in sound. His preference for subtle and straightforward melodies allows for sharp turns and staggering, bizarre and variegated sonic textures.

I Want Wind to Blow for example, builds to a barrage of bass drum kicks and distorted cymbals that unerringly ferry the image of thunder peals over a midnight mountain.

Elverum's legacy (as The Microphones and Mount Eerie, and in collaborations with indie veterans like Mirah, Little Wings, Julie Doiron, and Beat Happening) totemizes the mountains and unmanicured woods of the American Northwest. His respect for the dasein presence of the universe enables music coherent, gravity-laden and emotionally intelligent. His work embodies a universe of mottled artistry. 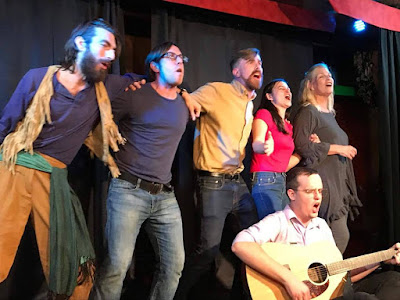 When Can Do is not quite all of that, nor should it be. But their loose affective logic and facility with raw, accessible moods are peculiarly toward that genius. Their improvisational tunes are at turns tender and vulnerable, punchy and spastic, sincere and self-conscious--they sound a pinch like the charming feral natter of 90s Isaac Brock or John Darnielle.

Breathe You In however, is utterly Elverum-esque. Consider the resemblance between it and The Microphones' Antlers.

Both songs render a sense of intimacy through sighing speak-sing. Difficult, quiet boldness that culminates in reverie. I feel as though I've stumbled across a person lost in prayer, who then becomes transfigured. That's a rare and subtle ability; no small achievement for any music group, not to mention one that makes their tunes up on the spot.

These qualities are gratifying even when When Can Do slips into plain silliness, which is their right. The same ego-shunting capacity that allows improvisers to think outside themselves, after all, allows them to not take themselves too seriously.


Go Slow is a Western fluent in howl and harmony enough to make any cowboy-hearted moke drop a surreptitious tear.

Keep in mind, these are only recordings from their practices. The musical scenes they perform tell more plotted stories. I'm looking forward to catching their next show. Lucky for us, When Can Do is gonna keep making music and making audiences laugh, on and off stage.


You can keep track of their performances on the When Can Do Facebook page. More on some of these themes in Part 2's review of Swiss Army Man, coming soon.